Netflix loses sight of their most important asset: the subscriber 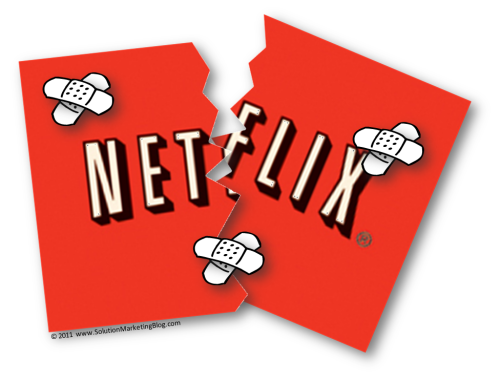 If you’ve read The Solution Marketing Blog for a while, you know that business (or consumer) problems tend to remain fairly constant while the technologies and solutions to those problems tend to advance at a more rapid pace.  That’s one reason why most problems have multiple solutions.  And it’s why dominating a market today does not guarantee dominance forever.  Just ask General Cinema (General Who?) or Blockbuster or, well, you get the point.

So, if you’re a savvy solution marketer, you realize that today’s hot technology or medium will eventually be replaced by another.It seems “the new guys” usually lead the disruptive technologies and solutions.  But it doesn’t have to be that way: the smartest incumbents will continue to innovate (often incrementally) in order to stay ahead – and even reset the bar for their competitors.  Think of Apple’s continuous cycle of innovation.  Heck, think of Apple, inventor of the home PC, talking about how the iPad ushered in the post-PC world.

The movie rental biz is a great case in point.  Movie rental has migrated from storefront VCR and later DVD rental from Blockbuster to rotating DVD rentals from Netflix and grocery store kiosks from Redbox and now, increasingly on-demand video from cable companies and streaming video from Netflix, Apple and others.

For consumers:
“watching the movies I want, at my home, with minimal effort.”

So the industry is in flux and if you’re an incumbent, you have to stay well ahead of the competition, which is where Netflix finds itself today.  As you may know, Netflix’s rotating mail-order DVD rental put a major dent in Blockbuster (old news).  Consumers can borrow one, two, three etc videos at once based on their monthly plan.  If you rent a few videos each month, the plans can work great – and with videos delivered in the mail to your house, you don’t have to waste time picking up and then returning videos to a store (or worry about late fees – remember those?).

Netflix was poised for wild growth

Netflix has delivered consistent subscriber growth over the years.  By the end of March 2011, Netflix had 22.8 millions subscribers – more than any of the cable companies and just north of Comcast’s 22.76 million, according to SAI Business Insider.

But they had a nagging problem: they knew that eventually, someday, consumers would switch from DVDs to streaming media.  Having eclipsed Blockbuster and others with their mail-order DVD rental service, Netflix was determined not to let themselves get eclipsed:

For the past five years, my greatest fear at Netflix has been that we wouldn’t make the leap from success in DVDs to success in streaming. Most companies that are great at something – like AOL dialup or Borders bookstores – do not become great at new things people want (streaming for us) because they are afraid to hurt their initial business.

Netflix was ready to move to streaming, even if their streaming library was far smaller than their DVD library.  Apparently, their customers were not.

Over the summer of 2011, Netflix increased the price of DVD rental by 60% and then announced plans to separate the DVD from the streaming business.  And it was a very real separation: now customers would have to order from two separate sites, increasing inconvenience and price at the same time.

Predictably, customers revolted.  If they weren’t upset enough by the price increase, they were incensed at the company’s lack of empathy.

Netflix Inc., which once could do little wrong in the eyes of customers and investors, has lost the goodwill of both. 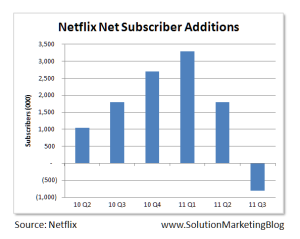 And those customers rewarded the company handsomely by defecting in droves.  By the end of September, Netflix suffered a 3% net decline in customers for the first time since 2009 at least (if ever).  Compare that to quarterly growth rates as high as 17% for Q1 2011.  From an all-time high of $299 in July to $84 at today’s close, the share price has dropped by a staggering 72%.  With competitors seizing the opportunity, it may take the company a long time to regain both subscribers and investors.

As you might imagine, Nextflix’s folly is a cautionary tale to any solution marketer.  In my next post on Nov 7, I’ll explain why.

3 responses to “Netflix: It’s the Customer, Stupid, Part I”